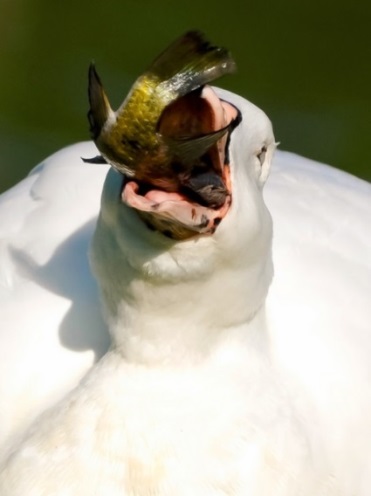 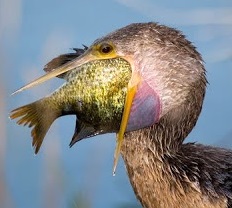 Fattening techniques are used on many farms that raise animals for human consumption.

Foie gras production is based on the natural ability of palmipeds to store large quantities of fat in their livers and sub-cutaneous tissue.

Like wild birds before migration, fat palmipeds have a spontaneous tendency to overeat to build up energy reserves.

Fattening: a very short period in the animal's life 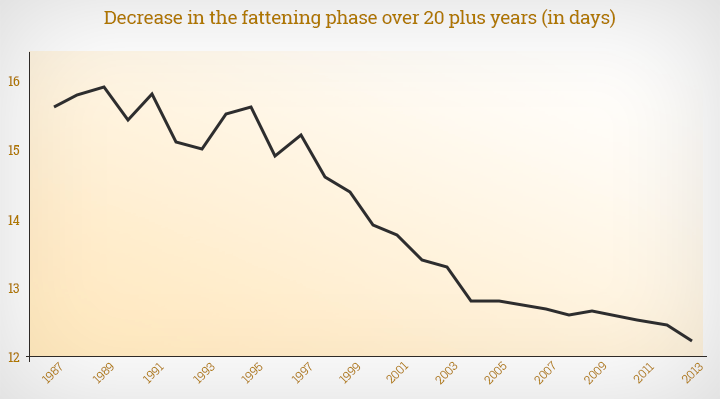 Thanks to the breeding of the best-suited animals and to improvements in the techniques used, the period during which Mulard ducks are fattened decreased from 15.6 days to 12.8 days between 1987 and 2005. It has now reached an average of 11 days.

Fattening consists in giving ducks or geese a large quantity of feed two to three times a day, depending on the species, for a short period of time.

The main fattening operation consists in placing a mix of maize and water in the animal’s crop. The mix is placed using a smooth tube called an "embuc" adapted to the animal's anatomy (i.e. diameter and length of the œsophagus). 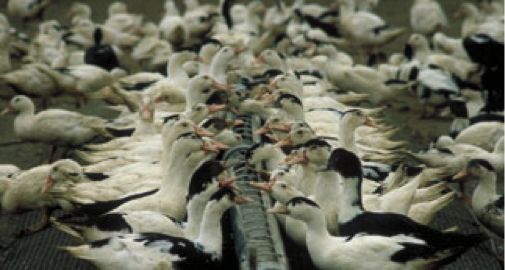 Under two weeks for the Mulard duck

The fattening phase for Mulard ducks lasts 12 days on average, that is, a total of 22 to 24 meals given two meals a day.

The fattening phase starts at about 11 weeks when the ducks are put in individual cages or collective pens. French farmers committed to a significant upgrade to their farms to remove all individual cages which will be forbidden as of 1 January 2016.

The amount of food given to Mulard ducks increases very gradually by 20 g per meal over 10 days, based on each animal's capacity, and tops out at 400 g.

About 18 days for the grey south-western goose

The fattening phase for geese is about 18 days, based on three meals a day, for a total of 54 feedings.

Geese are larger and the amount they are fed increases by 50 g at each meal before topping out.

During the short period of the gavage, the ducks and geese are put into clean and well ventilated buildings. They are grouped together in collective pens.

In some farms, increasingly rarely, the birds are placed into individual cages called "épinettes".

Epinettes were long used because they facilitated the handling of the animals and strongly limited the risks of them getting injured.

They have gradually been replaced by new types of collective cages, in accordance with the European convention adopted on 22 June 1999.

All gavage installations will comply with the European standards as of 1st January 2016.

The modern collective accommodation systems allow the animals to:

The amount of feed is gradually increased (from 200 g to about 400 g by the end of fattening). The amounts are adjusted to what the animals can ingest naturally in one feeding.

Fattening only lasts about 10 seconds. It consists in carefully placing a mix of whole or ground maize and water in the crop of the duck or goose. To feed, the farmer introduces a smooth tube called an "embuc" into the animal's crop.

The equipment (materials, buildings, etc.) used for fattening is evolving continuously to improve the well-being of the animals.

The genetic characteristics of the ducks and geese selected have enabled a decrease in the fattening phase.

Farmers are very concerned about minimising animal mortality on their farms. This is true at every production step and, in particular, during fattening. Any increase in mortality would mean a financial loss that could threaten their livelihood.

According to industry statistics, the average mortality rate on palmiped foie gras farms is 2% to 4%. This is comparable to all other animal farming, regardless of species.

Duck before eating: the crop hasn't expanded / Duck after it has eaten on its own