The charter of foie gras professionals: a true ethics charter in effect in France for nearly 20 years

The professionals of the foie gras industry initiated a voluntary process in 1996 to set out the basic rules of animal welfare and provide guarantees for consumers.
The rules were brought together in a charter signed by the six professional groups concerned:

The charter contains 23 articles describing the basic rules to be followed at each step of foie gras production.

Caring for animals to ensure their welfare and providing consumers with superior products made according to tradition and identified by regulated appellation labels are the pillars of the French foie gras charter.

It reflects the willingness of professionals to comply with strict ethical rules developed to ensure the production of a perfect, exceptional food item recognised by Article 654-27-1 of the Rural Code as being "part of the protected cultural and gastronomic heritage of France".

The charter was updated in 2009. It complies with both French and European regulations in effect and extends them.

Article XXIII states that the Comité interprofessionnel des palmipèdes à foie gras (CIFOG) will be the plaintiff in any suits brought against industry professionals who don't comply with the charter.

The European charter for the production of fat palmipeds

European foie gras producers joined forces in the Euro Foie Gras federation in 2008. Their first joint task was to create a document committing them to the 12 points set out by the European Commission on animal welfare, within the framework of the Welfare Quality Project.

A European charter for the production of fat palmipeds was passed in Brussels on 24 January 2011. 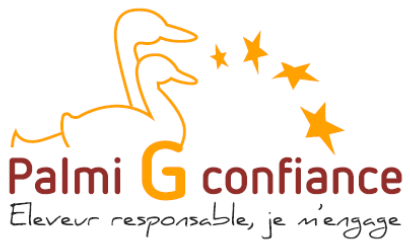 Foie Gras professionals have launched an initiative to ensure that farmers follow best practices for animal welfare. The initiative, called "Palmi G confiance", is voluntary and a logical continuation of professional ethics through which farmers affirm their commitment to transparency and ongoing improvement. Farmers agree to let an independent organisation carry out inspections to ensure that they are properly implementing the European Charter for the production of fat palmipeds.

The initiative is based on precise and detailed specifications that define the actions to be taken to comply with the commitments and to ensure progress.

The "Palmi G confiance" initiative was made official at the general meeting of June 27. It brought together 15 organisations representing over 90% of the specialised production channel. Members committed to implementing the initiative and encouraging their producers to follow it.

Seven commitments will be closely monitored by an independent organisation :

To comply with the initiative, farmers will be assisted by specially trained technicians. During their first visit, the approved technicians will assess the farm based on the initiative’s seven key criteria, set out ways for improvement and provide a time-frame over which "Palmi G confiance" should be effective. The signature of an agreement will validate the membership.

Foie gras, one of the best-known symbols of French gastronomy, is a dish with an ancestral tradition.